Common questions and answers about ferry and Eurotunnel Freight travel between Great Britain and the EU from January 2021.

What is a Port Pass and What do I Need to Provide?

Port Passes (known as GVMS GMR in GB, PBN in Ireland, SiBrexit in France) are created from Import MRNs. Without import MRNs you will not be able to generate a Port Pass with the relevant authority which will prevent access to the port.

Otherwise known as pre-lodgement or logistics envelope systems, Port Passes have been introduced by the UK and the EU to do two things -

Each, different jurisdiction has a port pass system to contend with -

Along with any required Safety & Security ENS Declaration, all the separate export and import / transit MRN numbers are then entered into the GB and EU port pass systems. If the declarations have been submitted correctly, the entry will be accepted and validated.

When accepted, a single reference will be produced. For example, from the GVMS system (GB) and the PBN system (Republic of Ireland). If any of the MRN numbers are invalid, the entry will be rejected and the haulier will need to contact the customer.

These reference numbers are then passed onto the ferry company to complete one last check to make sure the declarations have been completely correctly. 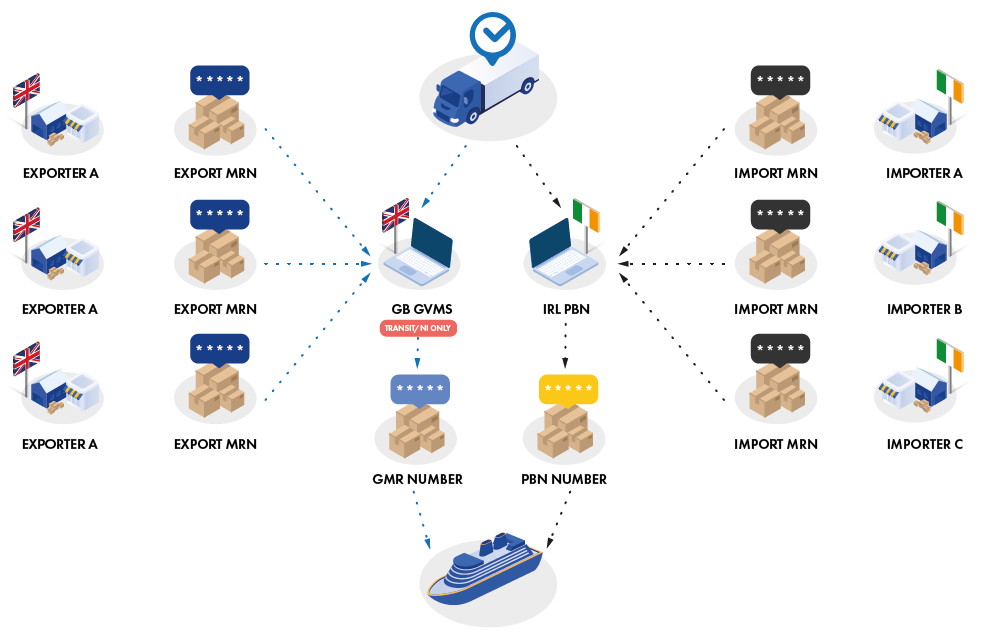 What are Safety and Security Declarations (ENS)?

SSDs are a way of analysing the potential risk of goods that are being imported or exported. Imported goods need an ENS (Entry Summary Declaration). This information will go to the appropriate Import Control System (ICS). Read more

What is an ENS?

An ENS (Entry Summary Declaration) is used to assess and monitor the risk that goods may carry when they are crossing over into the border of a different customs territory. Making sure that these goods are monitored is crucial and you will not be able to conduct trade without a complete declaration.

What is Operation Brock?

Operation Brock is the traffic management scheme to safely direct Heavy Goods Vehicles (HGVs) to both the Channel Tunnel (Folkestone) or the Port of Dover in the event there are severe delays in cross-channel travel.

What is Dover TAP?

Since April 2015, new traffic restrictions have been in place to help Dover’s residents go about their business without disruption from traffic using the Port, and to improve air quality in the town. This scheme is known as Dover TAP.

What should we do about passports?

You may need to renew your British passport earlier if you’re travelling from 1 January 2021.

On the day you travel, you’ll need your passport to both:

If you do not renew your passport, you may not be able to travel to most EU countries and Iceland, Liechtenstein, Norway and Switzerland.

You can check whether your passport is valid for the country you’re visiting.

These rules do not apply to travel to Ireland. You can continue to use your passport as long as it’s valid for the length of your stay.

What does all the customs terminology mean?

Take a look at our Customs Glossary for explanations of the common customs acronyms and terms.

You may still need to fill out SSDs (ENS/EXS), port passes and import/export declarations when transporting an empty vehicle from 1st January 2021. Read our guide

What is the Smart Freight system?

What is the customs process for basic and transit customs declarations GB <> EU?

How do I use an ATA Carnet for temporarily taking goods out of the UK?

If you are temporarily taking goods out of the UK, then you need to have an ATA Carnet.

Sometimes referred to as a 'passport for goods', an ATA Carnet is an international document that allows the temporary export and import of non-perishable goods for up to one year. This includes things such as tools of the trade, exhibition equipment and commercial samples.

Do I need a separate EORI number for trading with Northern Ireland?

Yes, the UK Customs Authorities have implented a different EORI number for NI declarations, starting with “XI” rather than “GB”. Read more

What do I need to know about Incoterms?

As an exporter, you need to make sure shipping and delivery responsibilities are written down and clearly understood. This is important as you only pay duty on the value of the goods and not the transportation, insurance etc. Read more

Is there a glossary of all the new acronyms being used?

Yes, our customs partner CustomsLink has created one. Read more

What kind of licenses do you need to transport goods GB <> EU?

From the 1st January 2021, you may be required to carry an import / export licence or certificate in order to transport particular goods between the UK and the EU. Read more

What is an IMO Number?

An IMO (International Maritime Organisation) number is a unique identifier that is given to all ships when they are constructed. When you complete your ENS you need to provide the IMO number of the vessel that you will be travelling upon. It is imperative that the IMO number that is submitted on the ENS matches that of the ship that you will be travelling on. Failure to submit a correct declaration will slow down your journey and prevent you from travelling until all of the documentation is completed correctly.

An S&SGB ENS declaration is what is needed from the 1st January 2022 when entering GB from the EU.

You do not need a KAP to enter Kent."

To travel through Kent to the port of Dover and Folkestone terminal, HGV drivers (in vehicles over 7.5 tonnes) will be required to hold a Kent Access Permit (KAP) from January 2021. This permit will only be obtainable by drivers who have provided all of the correct documentation required for freight movement at the port. This permit will only be accessible for 24 hours.